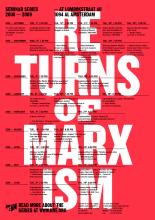 Boots Riley and The Coup in the IIRE

On Sunday the 8th April 2012 Boots Riley, the legendary anticapitalist MC from the hip-hop band The Coup, visited the IIRE for a public talk on the Occupy movement and the General Strike in Oakland.
Followed by a concert of The Coup in the neighbour venue Studio/K. See a presentation of both events in this video.

A Radical Approach to Humanitarian Relief from IIRE on Vimeo.

Natural disasters are becoming more and more a central issue of politics in the Third World, which is situated in the crossroad of socio-economical exploitation, and capitalist climate change. The answer to these catastrophes has often been taken on by independent NGO's and international agencies, both in the countries affected and in the First World countries where the funds are gathered.

The magazine Jaarboek Kritiek organised on Friday the 27th of January a debate with the German activist Detlef Hartmann. More than thirty people were present.