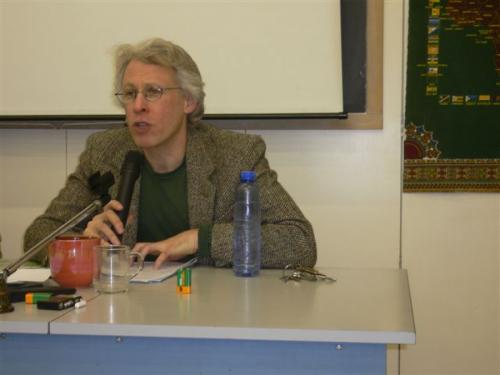 Over the years Peter has taught at the IIRE in a wide range of fields, recently with two main focuses. He teaches at virtually every IIRE Youth School on US and European imperialism and the geopolitical role of emerging powers, with a particular concentration on upheavals in the Middle East. For this topic he draws on his own activist experience, notably his work as programme co-ordinator in New York for National Mobilization for Survival (1989-92).

At IIRE sessions for more advanced students he focuses on intersections between sexuality, class and national/ethnic/religious/'racial' identities, with a concentration on interactions between Europe and the Islamic world. This was his focus for example at the 2015 IIRE Women's Seminar, where he was the only male guest lecturer. It has also been one of his topics at the IIRE LGBTIQ Strategy Seminars, which he conceived and coordinated as IIRE Co-Director in 1998, 2000 and 2002 and co-organized in 2009 and 2014.

Peter has emerged in the 21st century as a leading Marxist scholar in queer studies. His special contributions concern the roots of 'homonormativity' in neoliberalism, the impact of neoliberal globalization on same-sex sexualities in dependent countries, and links between queer and anti-capitalist resistance. He is also working on a series of studies on gender and sexual dimensions of Islamophobia, in both Europe and the Middle East. Finally, he continues his long-term work on the history of US and European socialism, connecting it to the left's record on feminist and LGBTIQ issues.

March 2015 '"Disengaging from the Muslim spirit": The Alliance Israélite Universelle and Moroccan Jews' (in Journal of Middle East Women's Studies, vol. 11, no. 1)

'[I]n engaging prose, with insightful readings of theorists and activists across many movements and continents, [Warped] attempts a new synthesis ... one of the most ambitious new books ... about the [LGBTQ] movement.' - Urvashi Vaid

2014 'Conceptions of sexual freedom in Marcuse, Foucault and Rubin' (in Journal of the International Network of Sexual Ethics and Politics (INSEP) vol. 2, no. 2) http://www.europe-solidaire.org/spip.php?article35687

June 2012 'Byron and Ottoman love: Orientalism, Europeanization and same-sex sexualities in the early nineteenth-century Levant' (in Journal of European Studies, vol. 42, no. 2)

2011 'The fracturing of LGBT identities under neoliberal capitalism' (in Historical Materialism, vol. 19, no. 4)

Sept. 2009 'Changing families and communities: an LGBT contribution to an alternative development path' (in Development in Practice, vol. 19, no. 7)

'[A] unique, long-needed, and immensely valuable book ... brilliantly bound together by [its] editor. [Its] significance cannot be overstated.' - Martin Duberman

'Well written, well argued, and a major contribution to the history of Marxism and socialism in the U.S.' - Michael Löwy

'For en kritisk dialog' ('For a critical dialogue [between queer theory and Marxism]' (Denmark), in Socialistisk Information, no. 197, May 2005)

'"Gay marriage?"' (editor and co-author of survey of European same-sex marriage legislation and debates in International Viewpoint, no. 308, Feb. 1999)