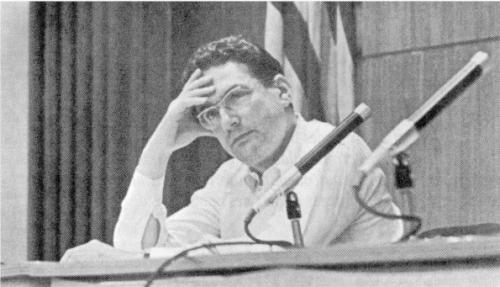 This year marks 25 years since Ernest Mandel died. Mandel (5 April 1923 – 20 July 1995)  was one of the most significant Marxist economists of the second half of the twentieth century. In 1982, he was central to founding our Institute. A prolific scholar and activist until the end of his life, Mandel wrote dozens of books and hundreds of articles.

In his intellectual and political work, Mandel’s Marxism was simultaneously ‘orthodox’ and ‘open’. He was an orthodox Marxist in the sense he defined in a 1983 article; ‘one who ‘acts’ in the spirit of Marx’ and is ‘bound by the obligation to resist all inhuman social conditions’.i His Marxism was open in the sense that Mandel described in a conversation with German radical Johannes Agnoli, it was ‘a task of continuing development, of incorporating new facts and new scientific considerations’; ‘it is part of the essential nature of Marxism to examine significant empirical changes’.ii

Mandel’s ‘orthodoxy and his openness were parts of a whole. Struggles against injustice and for emancipation circumstances were for him a motive force in history. As history is partly the product of continuing struggles, its development is radically uncertain. For Mandel, the history of these struggles was older than that of capitalism, and had its roots in fundamental aspects of human anthropology; in ‘the social character of labour, the social origins of communication and the impossibility to withdraw from these without paying a high price’.iii ‘Humanity’s wealth’, wrote Mandel, ‘consists of the wealth of human relations, in other words, of social relations.’iv With the development of productive forces under capitalism, the struggle against inhuman conditions made socialism a possibility – not more.

History can only be understood, Mandel argued, as a totality that is undergoing constant change, driven by inner contradictions. Hence, Mandel argued that Marxists needed to adopt a ‘historical genetic’ method to understand social phenomena.

Mandel used the example of the bourgeois state to develop this way of thinking. An ‘attempt to derive the character and essence of the bourgeois state directly from the categories of Marx’s Capital – either from “capital in general” or from the exchange and trade relations on the surface of bourgeois society, or from the conditions of valorization of capital – overlooks the fact that the bourgeoisie itself did not make the state in the sense of a state machinery that is disconnected from society and elevated to the status of an autonomous institution. The bourgeoisie limited itself to taking over the state as it existed before it came to power’.v

Considering (pre-capitalist) history in this way set Mandel apart from those ‘structural’ Marxists who attempted to explain social phenomena as the effects of the immutable laws governing capitalism. Mandel’s ‘reconciliation of theory and history’ made him an intellectual free spirit; ‘outside mainstream Marxism, outside doctrinaire Althusserianism and outside what Perry Anderson called “Western Marxism”, which had turned its back on economic research.’vi

Side-by-side with the history of class struggles is the history of science and social theory, Mandel wrote. Science follows its own laws and is not at the service of the ‘liberation of the proletariat’, of ‘freedom’ or of ‘historical progress’. Science is useful to the struggle for liberation when it provides knowledge that helps to make correct political decisions. But it would only be able to do so as science, following its laws, not when it was subjugated to political criteria. Mandel saw in Marxism the combination of the two histories, that of struggles against inhuman conditions and of scientific research.

Mandel’s major works in political economy (Marxist Economic Theory (1962), Europe versus America?: Contradictions of Imperialism (1970); Late Capitalism (1972) and Long Waves of Capitalist Development (1980)), as well as dozens of conjunctural articles, were all written to provide the workers movement and socialists with such tools to understand ongoing developments and make decisions. Late Capitalism in particular can be considered Mandel’s master-work. In it, Mandel rescued the theory of long waves in capitalism, a concept that had been used by both Marxist and non-Marxist economists like Kondratieff and Schumpeter, to predict the long downturn that began in the mid-seventies.

In his application of long wave theory, Mandel again combined theoretical concepts with historical research and empirical fact. Mandel argued that with the ‘conceptual tools of Marxist economic analysis’, it was possible to explain long term developments in capitalism, but only if one considered that several of the key variables of this conceptual ‘system’ were ‘partially autonomous variables’. Partially autonomous, not independent, as they functioned within parameters set by the capitalist system itself. ‘Capitalist states and governments’ can do many things, Mandel wrote, ‘and so can capitalist entrepreneurs and firms. But they cannot abolish money capital and profit as the starting-point and final point of the system's operations, nor can they abolish the operation of market forces, or eliminate the law of value.’vii

His own contribution Marxist economy theory Mandel described as ‘an additional time-frame for proposition (9): the “long waves of capitalist development”, in which among other things, basic technological revolutions are realized, and the equalization of the rate of profit between non-monopolized and monopolized sectors asserts itself.’

According to Mandel, these ‘propositions’ would be accepted by most Marxists, ‘with the possible exception of proposition 10’. That Mandel considered capitalist collapse to be ‘inevitable’ did not mean socialism was as well: ‘The collapse of capitalism is inevitable [...] After the experience of two world wars, two world economic crises of the magnitude of those of 1929 to 1933 and of the present one, we have little reason to doubt this. But this collapse can lead to two completely opposite results: forward to socialism, or backward to barbarism.’

The ten propositions are essentially ‘endogenous’ to capitalism from an economic point of view. In other words, they are produced by the structure of the system; ‘private ownership of the means of production, primitive accumulation of money capital, creation of a class of wage earners, expanding commodity production, i.e. market economy’. But apart from these ‘endogenous’ factors, there are ‘exogenous’ factors as well since ‘the concrete historical process of capitalist development is always the result of an interaction between the system and the environment in which it develops; this environment is never 100 percent capitalist.’

The non-capitalist elements in its environment, as well as the results of pre-capitalist history have an impact on the key variables of capitalism. Although pre-capitalist ‘anti-slavery revolts, peasant revolts in the old Asian mode of production, peasant revolts of the late Middle Ages’ as well as the ‘the rebellious, machine-storming workers of early capitalism’ were destined to failure, such struggles also provided ‘a tremendous tradition of forms of struggle and organization as well as of revolutionary thoughts, ideals, dreams and hopes from which the proletarian struggle for emancipation draws nourishment’; without such predecessors, the development of the proletarian struggle would be much more difficult.viii

The long term laws of capitalist accumulation might assert themselves ‘behind the backs of the subjects’ but its effects are influenced by them, forming together part of the totality. In the long term, Mandel wrote, developments in the class struggle are ‘subordinated to the level of development of the productive forces, to the existing relations of production, and to the structures of major social classes’. But such a long term vision was of little help in deciding what to do. A certain level of the development of the productive forces makes possible a range of relations of productions, of frameworks in which the class struggle takes place. And these class struggles can have different outcomes. It is from within these changing conditions that socialists need to make choices and act; ‘we stand in the middle of the historical process’.ix

Every individual has to choose how to relate to this process, a choice that is partially individual, partially socially determined.

Towards the end of his life, Mandel was confronted with a crisis of the socialist project. Five years before he passed away, Mandel wrote that this crisis was ‘above all a crisis of credibility of socialist ideas. Five generations of socialists and three generations of workers were driven by the deep, unshakeable conviction that socialism [was] possible and necessary’; ‘the current generation is no longer convinced that it is possible’.x This was in essence the outcome of a crisis in ‘the praxis of socialists’, of the failures and crimes committed in the name of socialism.

Two years later, Mandel argued at a meeting of the Sao Paulo Forum of left parties that ‘The practice of socialists and communists must be totally consistent with their principles. We must not justify any alienating or oppressive practices whatsoever. We must, in practice, realize what Karl Marx called the categorical imperative: to struggle against all conditions in which human beings are alienated and humiliated. If our practice is consistent with this imperative, socialism will once again become a political force that will be invincible.’xi

Despite the hopes of some bourgeois ideologists, history did not end with the Cold War, and neo-liberalism did not ‘abolish boom and bust’. New generations of activists are rediscovering Marxism and anti-capitalism. A quarter of a century after his death, in the midst of multiple global crises, of health, of ecology, political and economic conditions, Mandel’s political and intellectual work in plotting a course away from barbarism, ‘towards socialism’ is of burning relevance.

This year, the IIRE is working on publishing and translating into English various articles by Ernest Mandel. Articles published so far can be found here: http://iire.org/taxonomy/term/56.

We are also working on three volumes of selected essays by Mandel. We are raising to help pay for the costs of editing, design and publication. Please consider making a donation here: http://iire.org/wp/donate/ (mention ‘Mandel book project’).

i Ernest Mandel on 'Emancipation, science and politics in Karl Marx', [http://iire.org/node/920].