No.41 Living our Internationalism: The first 30 years of the IIRE 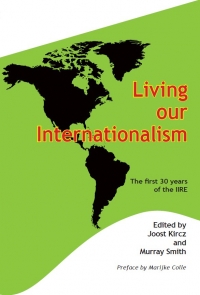 This summer marks IIRE’s thirtieth anniversary. In commemoration of the occasion, the latest issue of IIRE Notebooks for Study and Research is dedicated to covering the origins, activities and highlights of the Institute’s three decades of existence.

'Living our Internationalism' is a history of the Institute edited by co-founder Joost Kircz and former director Murray Smith. The book will be launched at a dinner for IIRE staff and volunteers at the IIRE on March 25, and is already available online.

In this unique volume, the International Institute for Research and Education’s current and previous co-directors explain its origins, activity and challenges. On 11 June 1981, the Institut international de recherches et de formation pour promouvoir le socialisme scientifi que et democratique (later shortened to the more versatile Institut International de Recherche et de Formation) was founded by a Belgian royal charter. It fulfilled a plan by Jacob Moneta, the editor-in-chief of the important big German trade union journal Metall, the Belgian Marxist economist Ernest Mandel, the Swiss economist Charles-André Udry and the philologist Jan Philipp Reemtsma. The following summer, the IIRE opened in Amsterdam as a centre for education and research in the service of progressive activists, linked closely to the Marxist and workers’ movements worldwide.

After three decades, hundreds of successful seminars, schools and lectures have taken part at the IIRE, with many dozens of participants from every continent coming to the IIRE.

The IIRE continues to serves progressive forces internationally through its educational programmes and by hosting scholar-activists. In Amsterdam, as in the new IIREs in Manila and Islamabad, its meeting rooms and bedrooms are used by a wide range of progressive activists and organisations. The IIRE is also the home for projects like the Notebooks for Study and Research, the Ernest Mandel Study Centre and the Institute for Critical Research.