No.19-20 The Fragmentation of Yugoslavia: An Overview 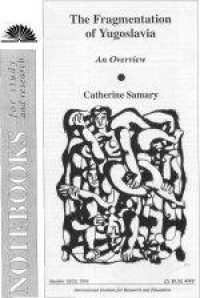 The Fragmentation of Yugoslavia is a comprehensive report on the Yugoslav tragedy: a historical overview; a multi-disciplinary social study; an invitation to collective reflection; and a call for solidarity with those working for peace with justice for all the ex-Yugoslav communities. Author Catherine Samary shows the interaction of national and international, socio-economic and political, past and present factors at work. She concludes that the war could have been avoided. She gives a multi-causal explanation, dissecting the various one-sided accounts being put forward and assigning responsibility to several actors. Going back in time, she looks at the history of the Yugoslav revolution and the Yugoslav Communists' conflict with Stalin. She draws a balance sheet of the Titoist regime, the experience of self-management, and the sharp turn toward the market that took place in the 1980s. Finally, she considers what national self-determination means today. Including Bosnian documents, a glossary, a bibliography, peace groups' addresses in ex-Yugoslavia and a list of helpful journals, this Notebook is an indispensable tool both for scholars seeking to draw the lessons of a half-century of Yugoslav history and for people working for lasting peace in the region.

Catherine Samary is an economist, specialist on Balkans and Eastern Europe. She has been active in several internationalist associations since the sixties. Founding member of Espaces Marx and member of the scientific council of the French association ATTAC. She teaches at the Université Paris-Dauphine, where she is also involved as researcher in the IRISSO (Inter-disciplinary Institute of Research in Social Sciences) ; she is also associated to the Institut d'Etudes Européennes at Université Paris 8 where she makes lectures on Eastward enlargement of the European Union. An IIRE Fellow, Samary is also the author of No.7/8 Market, Plan and Democracy: The Experience of the So-Called Socialist Countries. Besides her studies on Yugoslavia, she does ongoing research on the (ex-) Soviet Union, Eastern Europe, and theoretical and historical questions concerning transitional economies and societies.