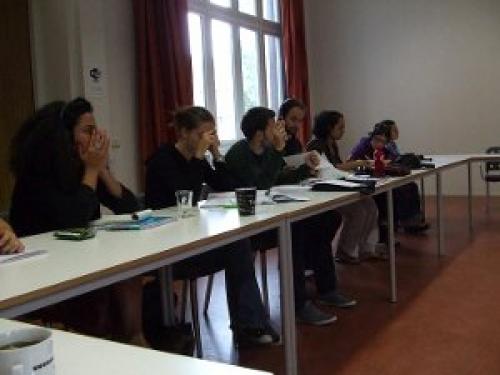 The school, which is aimed at young activists from around the world, will take place from 20 to 31 August in the IIRE (International Institute for Research and Education) in Amsterdam. It aims to provide training for intervening into social struggles with a global perspective.

Ernesto, an Izquierda Anticapitalista activist in Cadiz, summed up the daily life at last year’s school.

"We were all there with a clear objective, to become good cadres to one day make the revolution. The political tension was felt from half past eight in the morning hours until the following day’s sunrise. A quick breakfast preceded three intense hours of brilliant presentations by a number of illustrious experts, who over ten days would simply become our friends and colleagues.

The result, after three hours, was self-directed collective work to create a great lunch where discussion and questions did not stop, despite the risk of overheating! Free time after lunch, during which we usually went to read and discuss, was preceded by intense debate, in our language groups, which ​ were incredibly successful in terms of conclusions. And to crown the day, there’s nothing like a pooling of these findings and the beginning of a discussion group, which sometimes identified issues left unanswered even by the talented lecturers.”

This year, confirmed attendance has exceeded that of other years. We will have 26 participants from Brazil, Croatia, Denmark, the Spanish, the Philippines, France, England, Portugal, Puerto Rico and Turkey. It is therefore one of the most international Youth Schools we have had.

This year the school takes place in a context of world- wide ecological, economic and political crisis. That makes all the more urgent both an overview on the situation of social struggles around the world and a reflection on the strategy needed to win. We have therefore developed a program that pays special attention to the effects of the crisis on different regions and revolutionary processes underway.

The program this year is as follows:

29/08 The effects of global crisis in Europe Speakers: CADTM and Alex Merlo