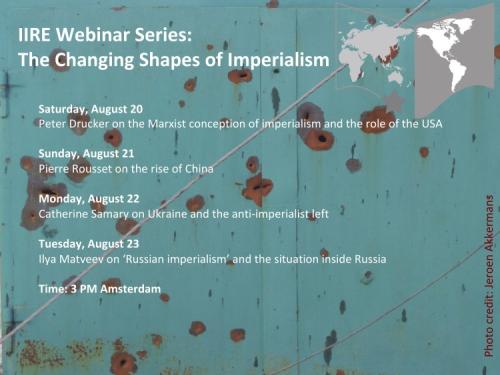 The Russian invasion of Ukraine has led to renewed discussion of the notion of imperialism. Is the invasion proof that Russia is an imperialist power? But Russia is not the only country described as an imperialist power. China’s international influence has increased dramatically in the past ten years. In South-East Asia, China's claims over large parts of the South China Sea has brought it into conflict with Vietnam, Indonesia and the Philippines. Worldwide, Chinese investments play an increasingly important role. Developments such as these have lead many analysts to describe the country as a rising or even established imperialist power. What does the development of countries like Russia and China mean for the position of the United States, the country that is still the most powerful imperialist force? And what would this mean for the political tasks of the radical left? To discuss these questions, the IIRE is organizing a series of online lectures.

August 20, Peter Drucker on the Marxist conception of imperialism and the role of the USA.
Peter is a former co-director of the IIRE. He is an advisory editor of the US socialist journal Against the Current and author of Warped: Gay Normality and Queer Anti-Capitalism (Haymarket).

August 21 Pierre Rousset on the rise of China.
A former co-director of the IIRE as well, Pierre is especially involved in solidarity with different Asian countries, author of works on East Asian politics and ecology and editor of the website Europe Solidaire.

August 22 Catherine Samary on Ukraine and the anti-imperialist left.
Catherine is an economist and socialist activist in France. She has written many articles and books on the evolution of the so-called ‘socialist countries’ in the East of Europe and is involved in solidarity activism with Ukraine. She has a website at csamary.fr.

August 23 Ilya Matveev on ‘Russian imperialism’ and the situation inside Russia.
Ilya is a political scientist formerly based in St Petersburg, Russia, and cooperator with the media-project posle.media

Time: 15.00 (Amsterdam)
The events will be in English and will be recorded.
Click here to register.