No.52 Capitalism - Crisis and Alternatives 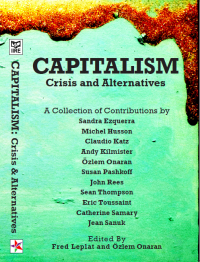 The IIRE presents the number 52 of it's Notebooks for Study and Research series, edited in collaboration with Resistance Books.

This book is the follow up to the previous book ‘Socialists and the Capitalist Recession’ published in 2009. Both books are the result of a previously held seminar bringing together anticapitalist economists and activists at the IIRE in Amsterdam. The aim of this Notebook is to present a comparative analysis of the crisis in different regions and to contribute to the debates about alternatives with an emphasis on the multiple dimensions of the crisis. Follows a presentation of the different chapters:

This chapter clarifies the role of finance in the functioning of neoliberal capitalism. It then goes on to the new phase in which the current austerity plans are put in place in Europe and it concludes with the discussion on the programmatic and strategic conditions for the emergence of an anticapitalist alternative.

The article starts with a brief overview of the main characteristics of  British capitalism since the Second World War. It then describes the neoliberal era in Britain and its specific contradictions. The severe impact of the current crisis leads to a short discussion on strategies for the future.

The impact of even more austerity measures in Britain is analysed and illustrated in detail. From rising unemployment to the privatisation the remaining parts of the public sector, the figures show why British families are currently facing the biggest fall in median household income since the 1970s.

The proposals for a Green New Deal as put forward by supporters of the Green Party are the starting point for a discussion on alternative proposals. The aim of those concrete proposals is to fight for an alternative solution: the production of social goods rather than the creation of conditions for renewed capital accumulation.

In his contribution, John Rees explains the need of a deeper understanding of the current systemic crisis of capitalism. He discusses ‘use and abuse of the falling rate of profit’ and the role of state spending. He concludes with the necessity of building a united front for resisting the crisis.

Neoliberalism has tried to solve its  crisis via a major attack on labour. This chapter focuses on the current crisis in Western Europe and on how the wage suppression evolved into the sovereign debt crisis in Europe. The chapter concludes with suggestions for a transitional program towards an alternative Europe.

The debt in the North began to reach high levels in the 1980s. The main creditors are European banks. Greece is the very symbol of illegitimate debt. The Irish crisis demonstrates the failure of neoliberalism. The private debt is much higher than the public debt. Stiglitz and others defend the suspension of debt repayment. Alternatives and beginning convergences of resistance in Europe.

The chapter focuses on the crisis in the countries of eastern Europe, starting with the ‘transition’ to capitalism at the end of the 1980s. The concept of ‘core and periphery’ played an important role in the building of the EU. What were the consequences of EU-membership  for the countries of Eastern Europe? What  is the role of the IMF in imposing the new austerity plans?

The article describes the emergence of China as a new capitalist power. How does China resist against this crisis, with which contradictions is China now confronted? Will rebalancing growth in favour of the domestic market be the solution?

What has been the impact of the global crisis on the different countries and regions of Latin America? The impact on trade is more important than on finance. The crisis caused an immediate increase in unemployment. Agribusiness and exporters are playing an increasing role in comparison to older ‘industrial’ bourgeois sectors. Priority to exports, wage constraints and a close association with multinational companies are now the post neoliberal consensus with which the people and progressive government are confronted now.

This closing chapter is an long interview with Eric on the development of the debt crisis in Europe since the summer of 2011. It gives very useful information for all activist work.