No.13 The Spanish Civil War in Euzkadi and Catalonia 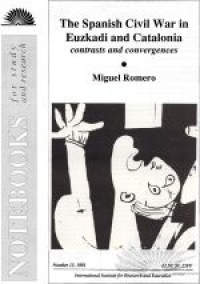 In The Spanish Civil War in Euzkadi and Catalonia, Miguel Romero questions conventional history and tries to look at it from the point of view of the defeated and oppressed. This starting point makes it possible for him to show that the defeat of the revolutionaries in the republican camp (particularly in Catalonia in spring 1937) paved the way for Franco's victory. The originality of his study is the way in which it integrates the national question into its analysis of the civil war. In the Basque country and in Catalonia, defence of the republic, working-class mobilization and the anti-fascist struggle took place in different and specific national contexts. Romero develops a comparative analysis of the civil war in the two countries. He notes that the shared tragic conclusion to the conflicts should not hide the very different dynamic of the social and political forces in the two situations.