No.55 DANGEROUS LIAISONS The marriages and divorces of Marxism and Feminism 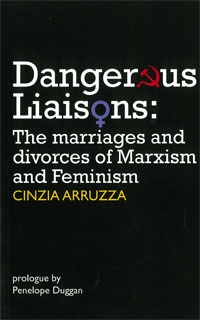 An accessible introduction to the relationship between the workers' movement and the women's movement. The first part is historical, the second theoretical.

Historical examples range from the mid-19th century to the 1970s and include events, debates and key personalities from China, Russia, the USA, France, Italy, Spain and Britain. It shows time and again the controversial and often difficult relationship between feminism and Marxism. The theoretical questions discussed include the origins of women's oppression, domestic labour, dual systems theory, performativity and differentialism. Women's oppression is a structural element of the division of labour and one of the direct factors through which capitalism not only reinforces its ideological domination but also organises the exploitation and reproduction of labour. The integration of patriarchal relations and capitalism has led to their radical transformation - in the family, in terms of women's place in production, in sexual relations and with respect to sexual identity.

Marxism needs to probe complex processes: ongoing transformations and crises, a global context creating an increasingly feminised workforce, and changing relations between men and women. It is a mistake to submerge gender into class or to believe that freedom from exploitation automatically brings about women's liberation and the ending of sexual roles. It is equally wrong is to think the class question can be removed and gender made the main enemy. The author believes passionately in the need to combine gender and class politics.

"Although Cinzia Arruzza calls her aim "modest," her book is anything but. She provides a masterful survey of the vexed relations between feminism and socialism over the course of more than two centuries. The result is not only a lucid overview but also a penetrating intervention into current debates. Perfectly timed to enlighten new generations of activists and theorists, Arruzza's book offers the best short introduction to a question that is as relevant as ever today: How, in the wake of a capitalist crisis of global dimensions, can struggles against male domination be made to synergize with struggles against neoliberalism?"

"Dangerous Liaisons offers an acute, critical and refreshingly open analysis of feminist theories and, best of all, links the development of theory to the historical and contemporary political issues facing women activists. A perfect book for students but also for anyone seeking to learn more about the ongoing dialogue between Marxism(s) and feminism(s). Aruzza's presentation of complicated theoretical debates is fair, accessible, and lively; her wide-ranging historical account hits the highlights (and lows) of feminist engagements with the revolutionary left across Europe and in the US."