No.56 Green Capitalism: Why it can't work 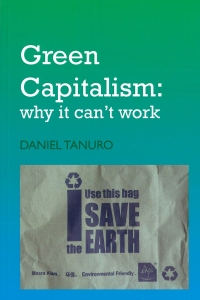 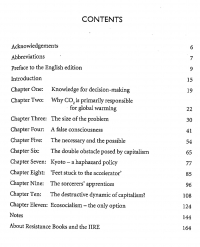 What should be done to resolve the climate crisis? Tanuro argues that government measures - eco-taxes, commodification of natural resources, and carbon trading - do not tackle the drive for profit. Evidence from the Intergovernmental Panel on Climate Change and other sources demonstrates the impossibility of a sustainable "green capitalism".

Climate degradation comes with the "natural" functioning of capitalism - a system based on the accumulation of capital (in particular the functioning of the energy system required by this accumulation process). An "emancipatory project" to overcome the impending crisis needs to recognize natural constraints and aim for a fundamental redefinition of social wealth. Tanuro uses the Marxist theory of value to explain ecological crisis. He addresses a failing in Marx's ecology: an inadequate appreciation of the crucial implications of capitalism's reliance on non-renewable fossil-fuel resources. He challenges both mainstream Green strategy and traditional Left alternatives. He points to solutions: "de-growth", "re-localisation" and the decentralisation of production are necessary to limit global warming.

The book includes a critique of popular writers on the environmental crisis, ranging from Jared Diamond to Hans Jonas, it discusses the economic and technological transition scenarios, and includes a critical assessment of the contributions of Marxist writers such as John Bellamy Foster, Paul Burkett and Ernest Mandel.

A lucid and rigorous demonstration that climate change cannot be overcome unless capitalism is overcome. The scourge of humanity is also the scourge of nature. This is a great achievement: putting forth the necessary contours of the direction that must be taken if we are to be equal to the greatest challenge ever faced by humankind. Joel Kovel, author The Enemy of Nature

The climate crisis is at a critical moment while millions despair that no action is being taken. The difficulties our "world leaders" have in taking meaningful action do not spring out of nowhere but from their refusal to understand that this crisis is the consequence of the globalised, neoliberal economic system. This book argues that we cannot simply green our current society, but that we need a more thorough, more fundamental social transformation. We also need to ensure that the struggle for a better world has built into its DNA the pursuit of an ecologically sustainable society.
Natalie Bennett, leader of the Green Party of England and Wales

This is probably the most important book I have ever read and reviewed. It is no exaggeration to say that on the response to its argument depends nothing less than the very survival of the planet on which we have our being.
Michael Barratt Brown, Spokesman #123

Daniel Tanuro is an agricultural engineer. His previously published articles include "21st Century Socialists must be Ecosocialists", in "The Global Fight for Climate Justice", Ian Angus (ed.), and "Marxism, Energy, and Ecology: The Moment of Truth", published in Capitalism Nature Socialism.