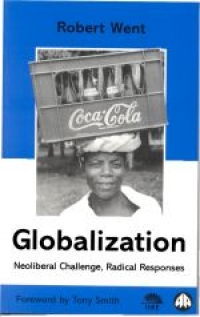 In this clear and concise overview, Robert Went refutes the myth that globalization is an entirely new phenomenon and an unavoidable process. While recognizing that globalization poses serious strategic challenges to progressive movements, he argues that these challenges are not insurmountable and that there is hope for real change. Viewing globalization in its historic perspective, Went argues that there can be no return to the postwar mode of expansion, but that the current trend must be altered. If it is not, he warns of greater social inequality, levelling down of wages, a deterioration of working conditions, life-threatening ecological disasters and a pervasive dictatorship of the market. To combat this scenario, Went challenges the left to rebuild social movements and offer a credible alternative.

Robert Went is an economist and former IIRE co-director, currently working as a researcher at the Faculty of Economics and Econometrics of the University of Amsterdam and for The Netherlands Court of Audit.