No.26 The Trade-Union Left and the Birth of a New South Africa 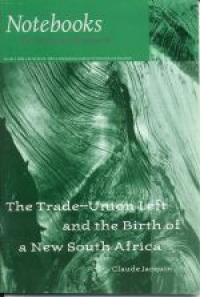 In the 1970s and '80s a wave of industrialization contributed to the greatest political and social mobilization in South African history, of which the trade-union movement was one of the central driving forces. One particularly interesting current that emerged was the 'independent trade-union left' that played a key role in the birth of the union federation COSATU. In The Trade-Union Left and the Birth of a New South Africa, Claude Jacquin follows the political, social and economic changes that ultimately brought an end to apartheid. All the forces that tried to combine 'democratic' emancipation with social liberation ultimately failed, he says. The current ANC government's choice for neo-liberal management of South African society is very remote from the options defended in the debates of the 1980s: not only from the socialism once advocated by the trade-union left, but also from the 'national democratic revolution' advocated by its adversaries in the South African Communist Party. Jacquin's account of how these two currents converged as they abandoned their original perspectives should contribute to lively debates.

Claude Jacquin covered South African events for the fortnighly International Viewpoint and carried out research during ten visits to South Africa between 1982 and 1992. His other works include studies of the Angolan revolution and the independence movement in New Caledonia.