The legitimacy of the Russian Revolution by Ernest Mandel, 1992 - 64 pages
Download this PDF for free
Price
€5.00
(Excl. shipment ) 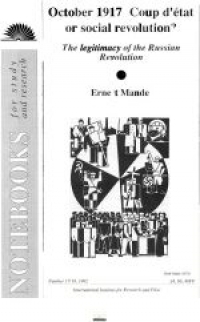 Although it is no longer 'fashionable' to refer to it, the Russian Revolution remains a major experience of the twentieth century. Knowledge of it is indispensable to those who wish to understand the contemporary world, or to see clearly how to proceed in the fight for socialism. In October 1917: Coup d'Etat or Social Revolution? Ernest Mandel sets out to analyze it in a polemical and critical essay. Polemical, because today this revolution is the target of such a strong campaign of ideological denigration that one of the formative experiences of the past century has become incomprehensible. Mandel, writing as both a historian and an activist, comes back to the most essential question: was October 1917 a totalitarian coup d'état or a socially liberating uprising? Critical, because there is nothing less useful than an apologetic reading of history. While vigorously reasserting the legitimacy of the Russian Revolution, Ernest Mandel also sets out to identify the critical mistakes that the Bolshevik leadership made in the period 1917-21. This is a valuable contribution to the discussion of the lessons to be learnt from the history of Bolshevism.

Ernest Mandel was active in the revolutionary socialist movement from the late 1930s until his death in 1995, and participated in the struggle against the Nazi occupation of Belgium. Successively editor of La Gauche, a member of the economic studies commission of the General Confederation of Labour of Belgium, and a leading figure of the independent radical left, he taught at the Free University of Brussels. He was the author of many books, including Marxist Economic Theory, The Formation of the Economic Thought of Karl Marx, Late Capitalism and Long Waves of Capitalist Development.