No.11-12 The Bourgeois Revolutions 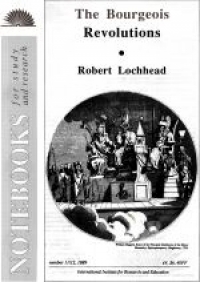 The current political relevance of the history of past revolutions is revealed in the ongoing polemics over the meaning of the French revolution of 1789 and the English revolution of 1640-60. The comparative study of seventeenth- and eighteenth-century revolutions is also indispensable to analyzing the particularities of the various Western European states to which these revolutions gave birth. It is a necessary reference point, finally, for the study of revolutions in the Third World. The idea that they were 'bourgeois revolutions' is central to the Marxist analysis of contemporary society. Robert Lochhead's study presents their general features and examines two case studies (the Low Countries and England) in depth to illustrate the complexity of the classes, parties and leaders who made these revolutions. It concludes with an overview of various interpretations of the nature of these revolutions, showing the diversity of the Marxist tradition in this regard.

Robert Lochhead was born in 1950 in Bern, Switzerland. He teaches biology and has been an activist in the public services union and a city councillor elected on the Socialist Alternative/Green slate in Nyon, Switzerland. He is the author of many articles published in the newspaper La Brèche, notably on ecology.