No.05 Class Struggle and Technological Innovation in Japan since 1945 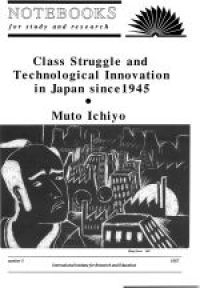 In the 1980s, free enterprise ideologues often presented Japan as a model of social harmony and economic dynamism. The essays included in this Notebook describe the real situation of postwar Japanese workers and unravel the mechanisms of the apparent Japanese consensus, in many cases akin to authoritarian suppression of independent thinking. Moto Ichiyo explains how the strategic choices made by the labour movement in the 1950s and '60s laid the basis for the later rightward shift. In the framework of a Marxist analysis, he deals in original and dialectical fashion with the changing relations between the US and Japan, the links between the Liberal Democratic Party and the masses, and the effects of Japanese-style rationalization (gorika) on workers' power on the shop floor.

Moto Ichiyo is a collaborator of the English-language periodical AMPO: Japan-Asia Quarterly. As both participant in and witness of the rise, decline and crisis of the Japanese New Left, he has written many articles about the situation in Japan: the politics of the regime, various popular struggles and the labour movement