Gilbert Achcar (born 1951 in Senegal) is a Lebanese-French academic, writer, and socialist activist. He is currently Professor of Development Studies and International Relations at the School of Oriental and African Studies.

Gilbert has degrees in Philosophy (ESL, Beirut), Social Sciences (UL, Beirut) and Social History/International Relations (University of Paris-VIII). He taught and/or researched in various universities and research centres in Beirut, Berlin and Paris. Gilbert's research interests and publication topics include: the political economy and sociology of globalisation, the global power structure and grand strategy, empire theory and the unfolding of US hegemony globally and in the 'Broader Middle East', politics and development economics of the countries of the Middle East and North Africa, the sociology of religion in general, of Islam and Islamic fundamentalism in particular, social change and social theory. 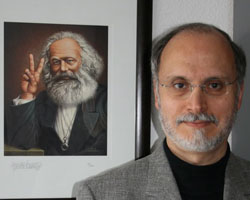 He is a frequent contributor to Le Monde Diplomatique, ZNet, and International Viewpoint.