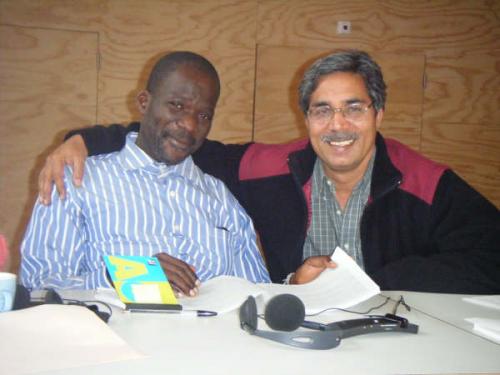 With 17 participants from 12 countries, the IIRE Global Justice School 2008 took place from 29 March to 17 April. Students came from Belgium, Brazil, Congo-Brazzaville, Ecuador, India, Mexico, Morocco, Pakistan, Philippines, USA, and France. It was the first Global Justice School since our relaunch.

The school was conducted in three languages: English, Spanish and French. A total of eighteen topics were divided into general thematic issues including: Political Economy, Globalisation: Political and Social Re-composition, Alternative Policies or the “De-linking” Debate, Global Disorder and Conflict, Neoliberal Globalisation and New Internationalism. Lecturers this year came from Mexico, Puerto Rico, Scotland, Italy, France, England and The Netherlands. A typical day was divided into morning lectures, afternoon group discussions assigned by languages and an early evening plenary session where participants were encouraged to engage in debate.

Remaining faithful to the tradition of open and democratic debate, this year's school was marked by profound reflection on a number of topics. With an opening report on the capitalist political economy, participants were eager to discuss the current US financial crisis that is apparently deepening and affecting all the regional economies of the world. Linked to this, the question of China's role in global capitalism caught the attention of most. One running topic that was discussed in all the sessions was the current profile and role of the working class. While everyone recognised the significant changes in the concept of working class identity, divergences according to geographical regions and production sector were found among the conceptualisation of socialist strategies.

Likewise, the report on the Role of the African State, accompanied by country reports from Morocco and Congo-Brazzaville, inspired participants to think about the diversity of today's international working class and how primitive accumulation is still used in capitalism. Climate change, identity politics, nationalism and religion were other topics, which participants found to be essential in their experiences.

Participants, ranging from students and trade union activists, to feminists and ATTAC militants expressed great satisfaction with the themes, discussion and the quality of the lectures and readings. Extra curricular activities this year included two films on the current situation in Brazil and Pakistan; a tour of the neighbouring International Institute of Social History, which holds the world’s largest collection of publications and documents concerning the worker’s movement; a tour of central Amsterdam and “Vrankrijk” -one of the oldest and one of the last squatter houses in the city. The group also participated in two Returns of Marxism lectures offered by Eva Ferranen and Sara Farris on Nation-State, Integration and Migration and Peter Drucker on Socialist Questions about Queer Activism. The collective life of the school was enriched by mixed language groups which rotated to do the shopping, cooking and cleaning; music from every country ensured good social gatherings after every dinner.