No 70. System Crash. An activist guide to making revolution. 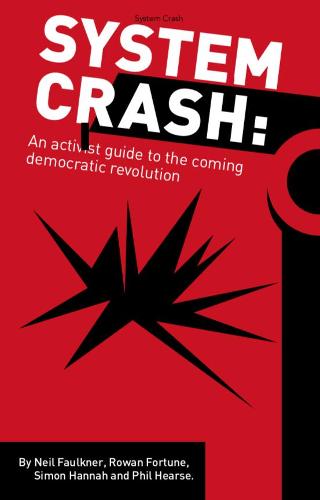 “Our collective future demands we start listening to people who can imagine a system other than globalised capitalism. This book is a blueprint for the world we must build together.” – Tansy Hoskins, author of Stitched-up: the anti-capitalist book of fashion (2014) and Foot Work: what your shoes tell you about globalisation (2020).

“System Crash is a very useful clear and concise ‘activist guide’ to the many and various reasons for which it is urgent to get rid of capitalism, and the pitfalls to be avoided in the pursuit of radical social change.” – Gilbert Achcar. His books include  Morbid Symptoms: Relapse in the Arab Uprising, Marxism, Orientalism, Cosmopolitanism.

Phil Hearse is a veteran socialist activist. One of the authors of Creeping Fascism, he taught Communication and Culture at a London college until his retirement in 2016. Many of his articles appear on the Socialist Resistance, International Viewpoint, and Mutiny websites. He is a supporter of Anti*Capitalist Resistance.

Rowan Fortune is a socialist, the editor of the utopian short story anthology Citizens of Nowhere, and author of the nonfiction ebook Writing Nowhere.

Simon Hannah is a local government worker and a socialist and trade union activist. He is the author of A Party with Socialists in it: a history of the Labour Left, Can’t Pay, Won’t Pay: the fight to stop the Poll Tax, and Radical Lambeth.

Nina Fortune is an activist with a focus on oppression. She has contributed essays to Mutiny about Black Lives Matter in the US and the disproportionate impact of coronavirus on BAME people in the UK.

It is the greatest crisis in human history. We are hurtling towards an abyss. The system is terminally diseased. Pandemic, climate crisis, endless war, mega-slums, police repression, creeping fascism, economic stagnation: these shape our world. On one side, grotesque greed and rampaging corporate power. On the other, poverty, oppression, and despair.

Capitalism came into the world, Marx wrote, ‘dripping from head to toe, from every pore, with blood and dirt’. Now, the ageing system is putrescent and gangrenous.But the last decade has seen explosions of revolt from below, firecracking across the globe, toppling dictators, resisting austerity, protesting racism, defending abortion rights, fighting for democracy. Here is the embryo of an alternative future.

Revolution – ending the rule of capital and the state – has become an existential necessity. This book is a call to arms.