A tribute to Ernie Tate 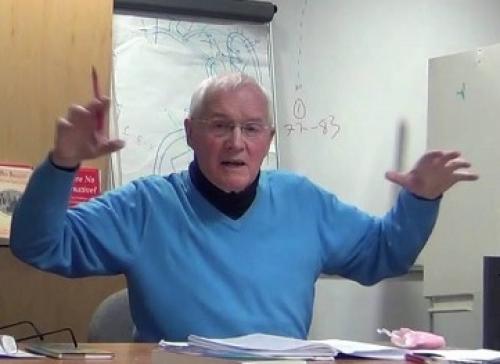 Ernest (‘Ernie’) Tate, one of the founders of the International Marxist Group and the Vietnam Solidarity Campaign in the 1960s, has died from cancer at the age of 86 at his home in Toronto. He played a vital role in a campaign that would re-shape the British far left.

Ernie was born in 1934 in the Shankill Road, heart of Protestant Belfast. In 1955 at the age of 21 he migrated to Canada and within a year had become a member of the Canadian Trotskyist organisation, the Socialist Educational League.

In 1966 Ernie met Jess Mackenzie, an immigrant from Scotland, and from then on, they formed an unbreakable personal and political partnership. Ernie had been asked to move to Britain as the part of the international aid being provided by North American Trotskyists to establish a British section of the Fourth International and Jess moved to join him.

Jess and Ernie worked at the newly-established political headquarters of the IMG, a few rooms above a Polish butcher in Toynbee Street, near Brick Lane. From there they ran the Pioneer Book Service, which was financed by the American Socialist Workers Party and which provided Marxist books at a time when writings by Trotsky, Mandel or Lenin could not be found in mainstream bookshops, and the Internet did not exist. They also worked on the IMG’s political projects and Jess was for a time organiser of the IMG’s small London branch.

After the 1965 World Congress of the Fourth International asked its sections to turn towards solidarity with the Vietnamese struggle, the IMG was instrumental in forming the Vietnam Solidarity Campaign (VSC), in which Ernie was a leading light. Through this Ernie became known to wider sections of the Left, and the campaign enabled him to put his engaging personality to good political use. He and Jess embodied some of the best features of the North American Trotskyist tradition at that time – calm and reasoned judgement, together with organisational seriousness. Ernie combined that with boundless good humour, a dry wit and a winning smile. He was the opposite of the caricatured hard-bitten Trotskyist fanatic, a caricature that political isolation made all-to-often a reality.

To build the VSC meant working with some of the well-known left wingers who supported the campaign, like engineering union executive member Ernie Roberts, Marxist academic Ralph Miliband, members of the New Left Review team like Quintin Hoare and Perry Anderson— and crucially Tariq Ali, former President of the Oxford University student union, a highly effective speaker and VSC’s best known figure. At this time the IMG’s best known public figure was Ken Coates, a Nottingham University lecturer, a prolific writer on workers controls and an effective speaker. But Coates was moving to the right and publicly broke with the VSC just as it was about to take off, attacked the organisation’s critical stance towards the transport workers union over a London dock strike, and was out of the IMG by April 1967.

The formation of the VSC was a brilliant political move by the IMG, and once it got going it was quickly supported by the International Socialists (now SWP). The near genocidal bombing of Vietnamese peasants and the air assault on North Vietnam caused mass outrage and helped fuel the growing student rebellion in Britain and around the world. Growing militancy among the student youth did not sit well with the moderation of the Communist party-backed British Council for Peace in Vietnam, which called only for negotiations. VSC revived the idea of solidarity, unconditional support for the oppressed in struggle, resuming in some ways the mood of the Left during the Spanish Civil War.

Ernie, Jess and Pat Jordan were all involved in organising the VSC’s first major demonstration in October 1967, which finished with clashes outside the old American Embassy in Grosvenor Square. The National Liberation Front’s spectacular Tet Offensive at the end of January 1968 fuelled the next major demonstration in March of that year, which finished with even more violent clashes with the police defending the embassy – and the giant demonstration that followed in October.

Ernie became centrally involved in a linked major initiative, the Bertrand Russell War Crimes Tribunal, which mobilised well-known figures to consider the evidence, of which there was ample quantities, of American war crimes in Vietnam. Ernie worked with Ralph Schoenman, Bertrand Russell’s key assistant, and his work on the Tribunal brought him into contact with such figures as Jean-Paul Sartre, French writer KS Karol, Simone de Beauvoir, Scottish miners leader Lawrence Daly and Isaac Deutscher, author of the majestic three-volume biography of Trotsky. Ernie got on well with Deutscher and visited his house several times. In turn Isaac Deutscher defended Ernie after he was beaten up selling pamphlets outside a rally of the Healyite SLL in Camden Town Hall. Deutscher stopped writing for the SLL’s Labour Review, which he had done under a pseudonym, and summoned the SLL leadership to his house for a dressing down.

Ernie was a member of the Fourth International’s executive committee, and frequently attended its meetings in Brussels; he and Jess went to the November 1967 meeting in Belgium preparing the upcoming West Berlin international conference and demonstration. They were astonished by the political sophistication and organisational capacities of the new generation of young revolutionaries. In later years Ernie, of course, located himself in the tradition of the Fourth International, but —in retrospect—was critical of what he thought in the 1960s and later had been a huge over-estimation of the strength of ‘world revolution’, and what he thought was sometimes the use of Fourth International affiliation as an artificial barrier between revolutionaries.

Through the VSC, in 1968 and 1969 the IMG started to grow among students, especially after the coup of recruiting Tariq Ali, but also more generally, because of the impact of the French ‘events’ of May 1968 and the intellectual prestige of Fourth International leader Ernest Mandel. But the personal financial situation of Jess and Ernie started to cause serious problems. They had important family commitments to meet, but were scraping by on a pittance, Ernie at the Toynbee Street centre and Jess as distribution manager for the new left-wing paper Black Dwarf. Deciding that the situation was unsustainable, they decided to go back to Canada, where they could get well-paid jobs, meet their commitments and prepare for the future.

The early IMG, in which Ernie and Jess were key, had a profound impact in the future of the revolutionary left in Britain. It was boosted to a new level of influence through the VSC. There was a lot of building material lying around in the mid-and late 1960s, but it needed a framework, a national campaign, to sustain it. And the fact that the IMG played such a crucial role had a lasting impact, not only on the revolutionary left, but on the militant left in general.

There are things which are taken as socialist common sense here today—for example the importance of women’s oppression and the struggle against racism and for Black liberation—were pioneered by the IMG in the late ‘60s and early ‘70s; likewise the importance of international solidarity and anti-imperialism (the British left is today littered with ‘solidarity’ campaigns and committees). These things weren’t at all common sense on much of the revolutionary left—the IMG had to fight for them. It was through comrades like Ernie that the far left was able to raise its sights to a new conception of internationalism, and a deeper understanding of gender and racial oppression.

Back in Toronto, Ernie got a job with the electricity utility Toronto Hydro and Jess with phone company Bell Canada. Ernie was the long-term vice-president and leading steward of the union local and played a major role in the 1989 Toronto Hydro strike. But things became difficult for them in the League for Socialist Action (LA), the FI’s Canadian section which was closely allied with the US SWP. There were differences with LSA leader Ross Dowson on a number of international issues, and Ernie was not given the full-time post he had been promised. By the end of the 1990s they felt that the organisation, under the influence of US SWP leader Jack Barnes, was headed in an irreversible sectarian direction and they decided to leave. But Ernie and Jess never gave up politics. Outside of LSA Jess and Ernie were involved with a series of socialist initiatives and union activism, and later the Socialist Project regroupment in which Toronto-based writers like Leo Panitch, Sam Gindin and Greg Albo played an important role. They were also regular visitors to the annual US ‘Marxism’ conferences, and also came to conferences of Socialist Resistance and the Socialist Alliance in in London and the Scottish Socialist Party in Glasgow.

I was able to reconnect with Ernie and Jess, for the first time in 31 years, when they came to London in 2000. With my partner Kathy Lowe I was able to visit them in Toronto on two occasions subsequently, and they also entertained us at the cottage they had built on the Bruce Peninsula, on the shores of Lake Huron. As their contribution to defending the environment, they had bought 100 acres on the peninsula, which they were allowing to go back to nature. Deer and brown bears visited their back garden, and beavers returned to the lake on their property.

Jessie and Ernie after retirement were able to travel a lot, going south to escape the Toronto winters. They loved the London theatre and eating in good restaurants. Ernie was always a genial companion, as was Jess, full of amusing anecdotes and sparkling conversation. We met up with them on the Bruce a few days after 9/11 attacks. “This is going to have awful political consequences” I said. “And it’s terrible that so many people should lose their lives in that way” Ernie replied. That was Ernie all over, seeing the human tragedy as well as the analytical consequences.

Beginning in the early 1980s Ernie and Jess developed their knowledge of Latin American politics and culture during visits to Argentina, Costa Rica, Ecuador, Panama, Venezuela, Colombia, Mexico and Peru, visits where they also pursued their new passion for bird watching. In 2018 they were very pleased to go back to Cuba to speak at a conference on the legacy of Trotsky.

In 2014 Resistance Books published Ernie’s two-volume book on revolutionary activism in Canada and Britain. The next year he spoke at a conference on 1960s politics at the University of East Anglia and at several other conferences and meetings on the same topic. The book is an invaluable historical record of the revolutionary left in that era and will be a political resource for years to come. As IMG old-timer Julian Atkinson says, “His memoirs are wonderfully balanced and objective. They rise above any trace of the factional.”

Ernie was pleased to be able to provide evidence for the Undercover Policing Enquiry about the infiltration of VSC from 1968. Unable to attend the event is person, his evidence was read into the record by a QC. Ernie used the enquiry as a platform to explain the role of the VSC and expose the role of the state’s role in using infiltration to spy on, and destabilise, the campaign and the left in general.

It is terribly hard to say goodbye to such a wonderful friend and comrade as Ernie, a real working class intellectual who combined amazing political and human qualities. It is of course a huge loss for Jess to whom we send our love and solidarity.