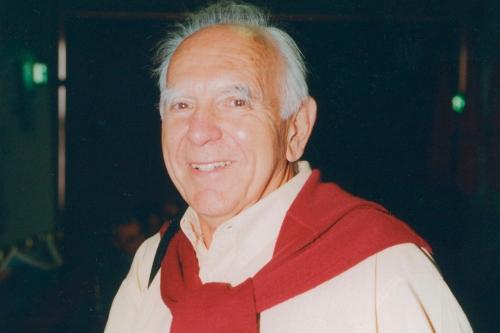 Resistance Books and the IIRE are appealing for donations to publish an English translation of Per una storia della IV internazionale. La testimonia di un comunista controcorrente by the Italian socialist Livio Maitan (1923 - 2004).
We have almost reached our goal of 5,000 euros, partly thanks to a significant donation in the form of translation work.
Per una storia della IV internazionale was published in 2006 with a preface by Daniel Bensaïd. To give an idea of the book, and of the person of Livio, we publish here the English translation of this preface.

We hope to raise 1,000 euros more to pay for the design and promotion of the book. Details on how to make a donation can be found here, or below.

Livio Maitan’s contribution to a history of the Fourth International is both an eye-witness account and the transmission of a legacy.

In fact, he is among the last to be able to perform this task, one of the last Mohicans of a generation of men and women who, at the end of the war and against the current of euphoria created by the glorious legend of Stalingrad, uncovered ‘Stalin’s crimes’ without waiting for Khrushchev’s revelations, Solzhenitsyn’s gulag, or the macabre book-keeping of the Black Book of Communism. Few dared to ‘go against the grain of history’. Perhaps, in order to withstand the irrationality of the age, a certain heroism of reason was required, an indomitable will, to comprehend the incomprehensible, decipher the hieroglyphics of history, and untangle the skein of cause and effect.

Livio's book bears witness to these efforts pursued relentlessly in the course of more than fifty years. It does justice, while avoiding pointless sentimentality, to that handful of unbending men and women who refused to choose a ‘camp’, according to the all-too-simple binary rhetoric of ‘whoever is not with me is against me’, and who fought on two fronts, against the main enemy (the imperial dictatorship of the capital) and an enemy considered secondary but no less fearsome (bureaucratic despotism).

Think of the jeers and mockery these militants suffered, often exposed to the dual repression of the declared enemy on the one hand and, morally even more unacceptable, of those who should have been their comrades in arms. It took all their conviction and their sense of righteousness to rescue from the great historical lie the victims of Stalin’s purges and trials: Andrès Nin, murdered in the camp at Alcalá de Henares, Ignace Reiss, Rudolf Klement, Ta Thu Thao, Kristian Raikovsky, Leon Trotsky himself, and many others whose names are unknown to us, all eliminated in this way. At midnight in the century, a ‘new political morality’ came knocking at the door of the new era, which in many respects recalled the era of the Renaissance, ‘even exceeding it in the extent and depth of its cruelties and bestialities: [...] No epoch of the past was so cruel, so ruthless, so cynical as our epoch’. Writing these lines in the introduction to his unfinished work, Stalin, Trotsky could not yet know of the genocide of the gas chambers and the nuclear extermination of Hiroshima. But he had already experienced the ‘great factory of lies’ that the bureaucratic regime of the Kremlin had become.

In the Stalinist trials, ‘only the Trotskyists did not confess’, according to the homage rendered them by the head of the Red Orchestra, Leopold Trepper, in his memoirs. It is not a question, at least not predominantly a question, of psychology or strength of mind, but of conviction and understanding of what is at stake, which alone allowed them to keep their heads and escape the madness of the age of dusk. How can one not give in to disappointment, disillusionment, resentment, or resigned indifference? Disappointment is a trifle, wrote David Rousset, a survivor of the Nazi concentration camps and their lucid analyst, ‘instead, we must understand’. The disappointed, the victims of resentment, the disillusioned, explain nothing, for they endorse the opposite of what was previously supported by the ‘same imperturbable authority’. How many old repentant Stalinists, old disillusioned Maoists, converted zealots and disenchanted believers have borne out this diagnosis!

It is precisely these capitulations and spectacular conversions that it was important to resist: ‘Disappointment is a luxury we cannot afford. The dilemma is simple but imperative. Whether to submit to mere fortune or else to understand and to take action. Action is not always possible. But you can always reach understanding. If history does not follow the course we expect, it is not the fault of cynical and cheating fate’. Writing these lines, David Rousset remained, despite his mistakes, faithful to a certain spirit of the Trotskyism of his youth.

His comments might be an epitaph to Livio Maitan's book. Above all, understand! Understand why the Second World War did not end with the overthrow of the Soviet bureaucracy and a new revolutionary wave. Understand the new dynamism of a capitalism that yesterday was in agony. Understand the contradictions of the societies that emerged from these convulsions, their unprecedented forms, whether it be the Yugoslav revolution, the Chinese revolution, or the drawing of an ‘iron curtain’ across Eastern Europe. Understand the first anti-bureaucratic revolts in East Berlin in 1953 and in Budapest in 1956, decipher the enigmas of China’s Cultural Revolution, provided that it is ‘understanding in order to act’, even in a limited way, even with scarce means, in order to maintain the fragile, taut bond, stretched almost to breaking point, between theory and practice.

Bien-pensants adopt a tone of irony about these Trotskyists, specialists in hair-splitting, and their constant splits. Yes, when the arena of experience is reduced, when contact with the masses weakens, there is a tendency to exaggerate theoretical divergences, to draw hasty conclusions, to dramatise differences that are ultimately ridiculous or temporary. It is the price of a tragic disproportion between the lyricism of ideas and the prosaic limits of reality. This dynamic can be all the more destructive when we are convinced that ‘the crisis of humanity is that of its revolutionary leadership’, and we aspire to solve it: a redemptive mission dictated by the crushing sense of responsibility that drives us to give of ourselves to History and that can end as pathological megalomania.

Livio had too great a sense of humour and self-irony to give in to it. A glance at the passages recording congresses of the Fourth International, replete with divisions and reconciliations, consulting the yellowed documents, it is clear that the polemics, the more theatrical the more that they were performed in empty rooms (i.e., against a background of indifference on the part of the masses), concerned burning issues of the time: the meaning of Stalinism and the world role of the Soviet Union, the dynamics of the struggles of liberation and colonial revolution, China’s place in the world, the analysis of the Algerian and Cuban revolutions, the transformations of social classes in the era of late capitalism, and so on.

Casting his mind back across these fifty years of struggle, mostly against the stream, Maitan does not claim to be writing the history of the Fourth International. That will be the job of historians, with the precious contribution that they are able to make, even with the adoption of a declared subjectivity. Thus, the comments about the controversies regarding the armed struggle in Latin America may appear incomplete and partial to many of us. We can argue with it, but it is nothing to fret about, for it is a partisan book, not above but at the heart of the melee. The manuscript was brutally interrupted in 1995, with the report of the XIII Congress of the Fourth International and with the working notes concerning the death of Ernest Mandel in that same year. This interruption and Mandel’s death take on a symbolic value. It is an era and a generation that come to an end with the final chapter on the ‘new world order’. Livio Maitan was, together with Mandel and their mentor Pierre Frank, one of the ferrymen who transmitted this legacy to us.

But, as Jacques Derrida said regretfully and clearly, ‘legacies are not an asset, a form of wealth that is received and deposited in the bank’, it is ‘an active affirmation’ -- not a property, but a becoming that is unceasingly renewed.

To conclude, I would like to add a few personal words of farewell, and to express my affection for Livio. I met him in 1967, when the Italian experience of the Left was a model for us all (a questionable one, with hindsight). I recall him during my daily meetings in the office of the International and in the premises of Inprecor throughout the eighties, irritated by idle chatter and meetings that started late, after waking from a brief, sacrosanct siesta with raised combative eyebrows and the liveliest eyes ever. There is no doubt, however, that he then suffered from a sort of exile and of loneliness, even if, in his sixties, he continued with his Sunday escapades to play football with his comrades from Rouge, all much younger than him. Again in 2002, on the occasion of the Second World Social Forum in Porto Alegre, when the Brazilian comrades rendered him a moving tribute, he sparkled with mischief and good humour. As if, in spite of the numerous wounds and scars that bore witness to a long militant life more accustomed to nights of defeat than to mornings of victory, and the frustration of having attended to obscure and thankless tasks without the comfort of notoriety, this young, pugnacious old man was always wrinkle-free.

How to make donations to help publish this book: