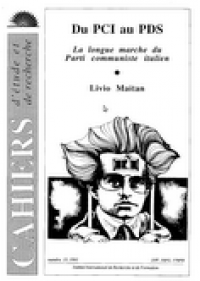 Livio Maitan (1923-2004) was active in the ltalian workers' movement since the beginning of the Second World War. A national organizer of the Socialist Youth at the Liberation, he broke with social democracy in 1947. Since 1991 he was in the leadership of the Party of Communist Refoundation. He taught sociology at the University of Rome and translated and introduced almost all the ltalian editions of Trotsky's writings. His works in English include Party, Army and Masses in China (1976).