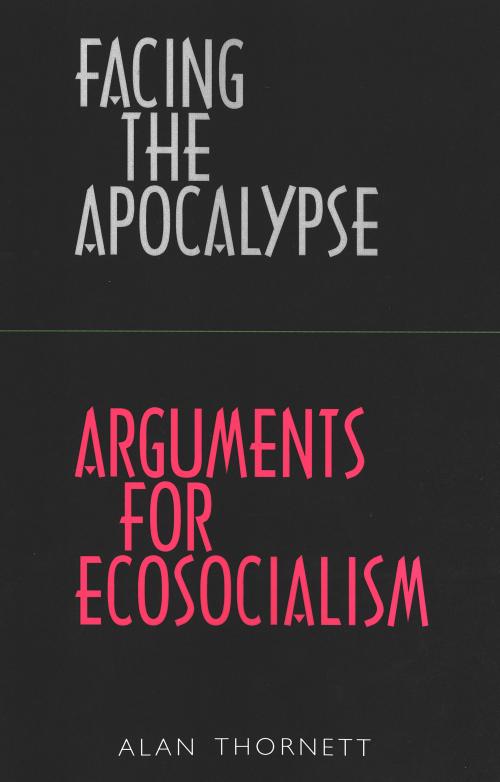 We are facing a multifaceted threat to life the planet. From a defence of the remarkable ecological content of classical Marxism – lost during the 20th century to the rise of productivism – Facing the Apocalypse. Arguments for Ecosocialism by Alan Thornett,  is an appeal to the socialist left to take the ecological crisis far more seriously. Thornett engages directly with major debates such as the rising human population and carbon pricing that remain unresolved on the socialist left. His approach is to promote a transitional approach, distinct from both those that think capitalism will find a solution and those who think revolutionary propaganda is enough. He argues that defending the planet against this crisis today requires broadest possible movement of those – the 99 per cent – who are victims of it.

''Alan Thornett’s book is an essential read for all who wish to challenge climate change and other environmental threats, from ocean acidification to mass extinction, that put our future in question. It is inspiring that a former car worker is such a passionate advocate of ecological politics. This is an original and wonderfully engaging contribution to the practical politics of climate change action. Alan is not one for pat slogans, but engages in vital debates about how to make our action effective in the face of an ecocidal system of global capitalism. It is vital that we read this book, engage with its arguments and build a movement for ecosocialism.''
Derek Wall (writer and a former principal speaker of the Green Party of England and Wales. Derek has been active in the struggle for Ecosocialism since the early 1980s).

''The world is governed by big transnationals that want to earn as much money as possible in the shortest possible time. To achieve this, they don’t hesitate to attack nature:
– Open-cast mining poisons water with cyanide.
– Agroindustry poisons the soil with bio-fuels to feed cars rather than people.
– The Amazon is plundered for wood and oil.
– Global warming causes the air to become warmer and warmer.
These attacks threaten the survival of our species and other animals and plants. This means our fundamental task is to take power from the transnational corporations and put it in the hands of humanity as a whole. That is why books like Alan Thornett’s are so important.''
Hugo Blanco (legendary leader of the struggles of workers, peasants and indigenous peoples in Peru and throughout Latin America).

''This is an important book! One may disagree on this or that issue – e.g. population, which I do not see as a problem in itself – but Alan Thornett’s arguments are an outstanding contribution to ecosocialist thinking – and action. In clear and precise language, without academic jargon, Facing The Apocalypse is not only a powerful “civilisational wake-up call”, but also a precious compass for the socio-ecological struggles of the future.''
Michael Löwy (co-author of the International Ecosocialist Manifesto of 2001 and the Belém Declaration of 2009).

Part One: The  scale  of  the  crisis
A ‘civilisational wake-up  call’; Planetary  boundaries; Fresh  water; The  biodiversity crisis