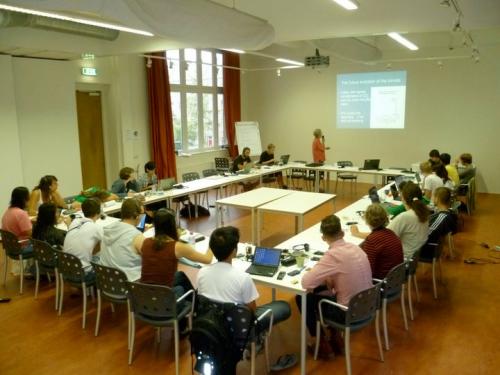 The international Youth School 2011 ended on August 31st. The final balance sheet written by the participants shows the intensity of this learning experience and the overall quality of the lectures. Twenty six participants from 11 different countries lived together for ten days. It was a period of study, reading and discussions.

Vinicius Almeida (from the PSoL in Brazil) describes on his blog, the arrival at the Institute:

“The IIRE (International Institute for Research and Education) is a four storey building. On the ground floor, there was the reception, the kitchen and the dining hall. On the first floor there is a landing with social space, a terrace and meeting rooms. The second floor contains the office and the library and on the third floor, we have the bedrooms for the participants. In this small space, we all were united in a project for radical change. The indignad@s from Spain, the French anticapitalists, university students from Puerto Rico, Turkey, Croatia and Sweden, and young workers from Denmark, they all were present.”

This school took place in a context of global crisis, the crash of the stock markets, the announcement of new austerity measures in many countries and a strong political instability. It is in this context that exchanges between participants were encouraged, and local experiences were explained.

The economist Catherine Samary gave a lecture on the economic crisis and three days were dedicated to the specific characteristics of the crisis in Asia, in Latin America and in Europe.

The global ecological crisis and the current global warming disaster showed the importance of breaking with productivism. The role of an autonomous women’s movement throughout modern history and in the current global capitalist system was also discussed. A large part of the debates was focused on the demands put forward by the social movements and on alternatives for this economic system.

On the press table we sold numerous newly published books by the IIRE and the Notebooks for Study and Research.