No.21 Factory Commitees and Workers' Control in Petrograd in 1917 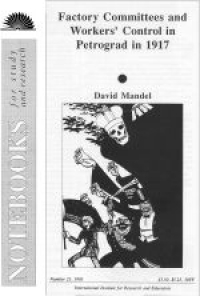 Factory Committees and Workers' Control in Petrograd in 1917 tells the story of 1917 'from below', delving into Russian-language archives to uncover worker-activists' own words. Petrograd workers did not dream at first of 'socialist experiments' in backward Russia. But factory owners put up a fierce resistance to demands for an eight-hour day and a 'constitutional regime' in the workplaces, and decided to shut down their plants rather than yield their prerogatives. Factory committees were ultimately driven, in a desperate effort to save workers' jobs, to take management into their own hands and appeal to the Bolshevik government to nationalize the factories. Mandel assesses and refutes common conceptions about 'utopian' and 'anarchistic' impulses supposedly behind the October Revolution.

David Mandel teaches political science at the Université du Québec à Montréal. He is active in solidarity with the Russian labour movement, and writes frequently on Russia for Alternatives, International Viewpoint and other publications. Among his previous works are The Petrograd Workers and the Fall of the Old Regime and Perestroika and the Soviet People.