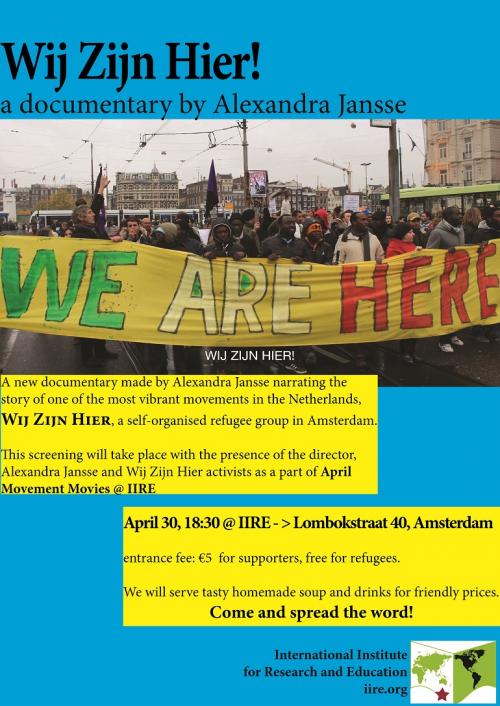 This month we are showing movies that are dedicated to break the silence imposed by official histories and/ or give voice to the movements that organize and fight against injustice and inequality. On April 9th, we start with Shadow Play. Shadow Play is an account of a hidden chapter of Indonesia’s history, the 1965-66 massacres that gave birth to General Suharto’s New Order in Indonesia. Through interviews with journalists covering the story, the film reveals the secret war of propaganda and media manipulation waged by the Indonesian army and actively aided by the governments of the United States, Britain and Australia. On April 16th, we show Let's Not Live Like Slaves by Yannis Youlountas. We organize the screening together with ReInform. This is an account of the Greek resistance. A French-Greek film which is based on testimonies of resistance in terms of self-organization, solidarity and autonomy. On April 30th, we will show Wij Zijn Hier, a recent documentary made by Alexandra Jansse narrating the story of one of the most vibrant movements in the Netherlands, Wij Zijn Hier, a self-organised refugee group in Amsterdam. this screening will take place with the presence of the director, Alexandra Jansse and Wij Zijn Hier activists. Apart from the movie on April 30th, which will have an entrance fee of 5 euro to contribute to costs of the movie, there will be no entrance fee but a donation box for those who can support our activities. We will serve tasty homemade soup and drinks for friendly prices. Come and spread the word! https://www.facebook.com/events/1389347864720772